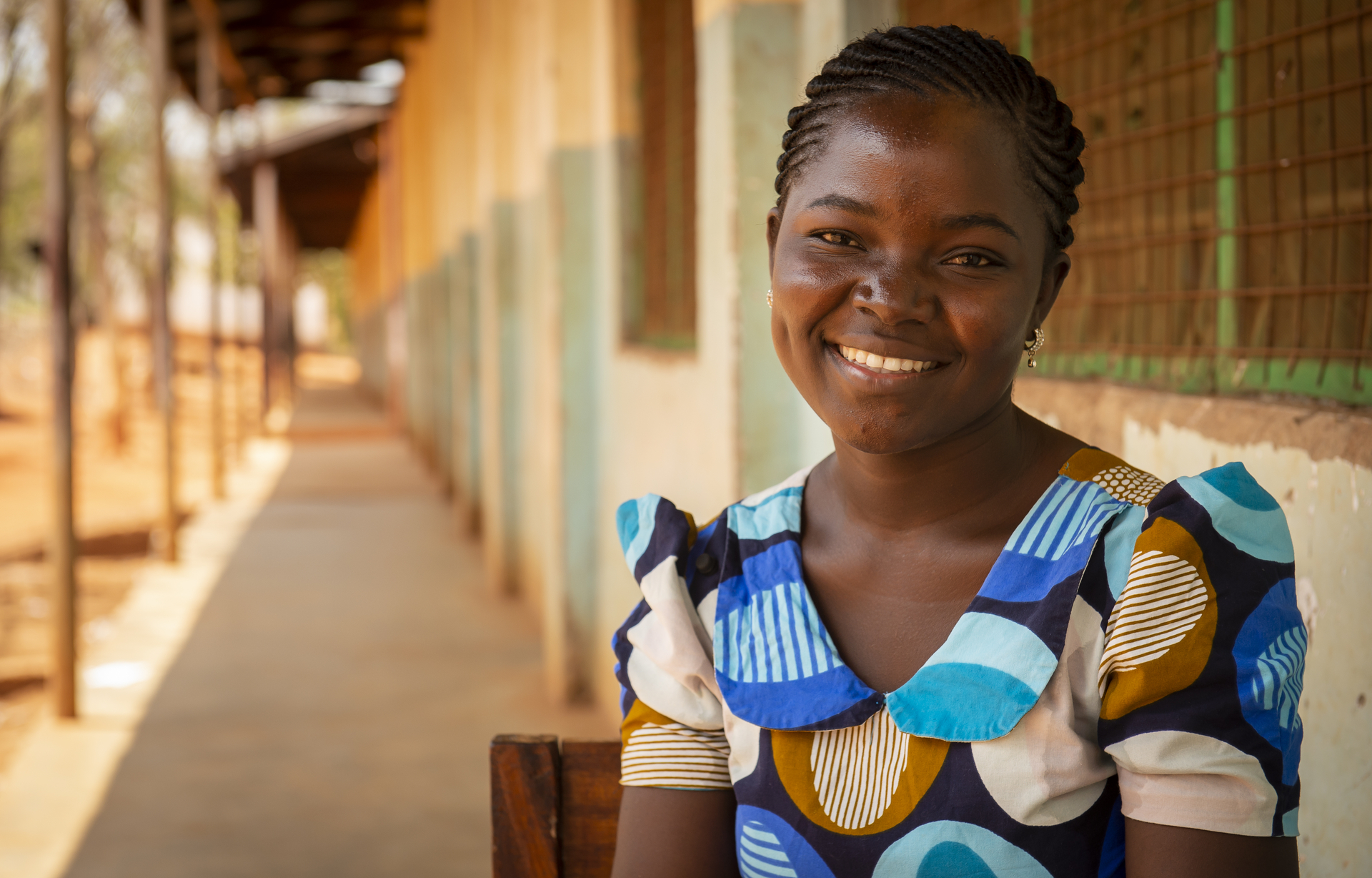 Sophia comes from a rural area of Tanzania. Her father passed away when she was very young, and she grew up in a single parent household with three siblings. Sophia’s mother worked hard to provide for her children by running a small business, and made enough money for Sophia to attend school every day. However, Sophia’s life changed rapidly when her mother became too ill to work, and the family faced severe financial pressure.

Sophia’s mother was no longer able to afford her school fees and other school going costs, like her uniform and books. Facing so many barriers to her education, Sophia was forced to drop out of school. Determined not to give up on her daughter’s education, Sophia’s mother spoke to the Head of school, who referred Sophia for CAMFED support. With school-going costs and fees paid, their hopes for the future were reignited.

My future outlook changed with CAMFED support, because every year we received support and I could afford to reach my dreams.

After graduation, Sophia joined the CAMFED Association of women leaders educated with CAMFED support and committed, with her peers, to paying forward the benefits of her education. Sophia trained as a Learner Guide, a para-educator and life skills mentor, delivering CAMFED’s My Better World curriculum, as well as vital sexual and reproductive health information, to secondary school students. Having faced the same challenges at home and in school as many of the students, Sophia understands their needs and is expertly placed to help overcome these barriers.

She says “The students I support come from my community so it is easy for me to interact and lead other activities outside of school.”  Living locally, Sophia forms study groups outside of school hours. She visits students at home, meeting their parents or guardians, and can raise any concerns with the school and local officials. Sophia aims to expand her tailoring business and support even more children in her community. Photo credit: CAMFED/Eliza Powell

Through My Better World we enable students to be good citizens, be creative, and to improve their lives.

Girls in Tanzania still face many barriers to education, at the root of which is poverty, which robs families of choice and opportunity.  Deeply embedded gender inequity, and a lack of female role models, mean that girls are at heightened risk of dropping out of school and into early marriage.  Learner Guides like Sophia provide the social support girls need to thrive in school and beyond the classroom, helping to raise their aspirations and connecting them with support networks around them including Head teachers, Parent Support Groups, Teacher Mentors, Community Development Committees, and other services that can help them.

While schools closed due to the COVID-19 pandemic, Learner Guides like Sophia have been proactively reaching out to students in their homes, in small, socially-distanced study groups and via radio programs to keep them motivated and on track with their studies. This support has been crucial in rural areas where students and families rarely have access to distance learning materials via television or the internet.

Education is important for girls because it is the key of life. It is the driver of the community and it frees one to have foresight.

In return for volunteering her time as a Learner Guide, Sophia received business and financial training, and access to a Kiva loan, in order to launch a business. Now she is an entrepreneur and business owner, tailoring and selling children’s clothes from her shop. Using the Kiva loans to purchase fabric and yarn, Sophia was able to expand her business and hire her sister as an employee.

The CAMFED Association means changing from depending on others to self-reliance and abolition of poverty.

On top of using profits from her business to support her own family, Sophia has also been supporting a secondary student called Hanipha. Hanipha had attended the life skills sessions at school, and upon following up with her at home, Sophia discovered she was on the verge of dropping out due to lack of funds. Stepping in, Sophia used her own money to provide Hanipha with exercise books, uniform, and school shoes, as well as offering her advice and mentoring.

When you get education, you can do anything in this world.

Sophia is a leader in her community and a role model to other girls. She has been selected as a facilitator for development in Kilosa District and attends community meetings, encouraging groups to work together to raise funds and start small businesses. It is Sophia’s ambition to reach even more young people and community members to help them start businesses and be able to support themselves.

In October 2020, Sophia attended an event at which the Minister from the President’s Office – Regional Administration and Local Government (PO-RALG) paid tribute to the activism of Learner Guides in Tanzania and their support for vulnerable students, awarding them with certificates of recognition, and promising government support for scaling the Learner Guide program.

My hope is to help young people become self-aware to fulfill their goals and to lead my business and expand more, and help my family.

Sophia has big ambitions for the future — she has completed CAMFED’s vocational (BTEC) qualification, and is applying to college.  She says “I am proud that I have been able to achieve my goals and also to help students thrive and be able to finish school.”