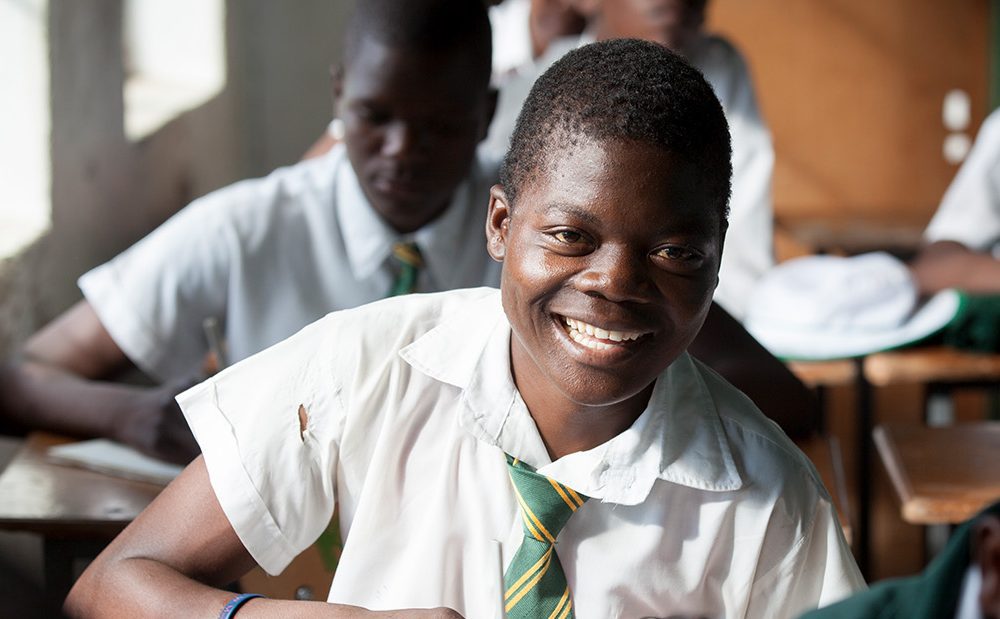 Isaac is one of six children, three girls and three boys. His father is a part-time builder and his mother is unemployed. The family struggled to cover all the children’s school-going costs, and Isaac feared he would not finish his education. Registration for exams is during the rainy season, a time when building work is scarce and it was difficult for Isaac’s father to pay the fees.

The thought of dropping out of school was disheartening for Isaac. His older sister and favourite teacher had given him a passion for Geography, passing on their knowledge to him. He also knew that his education was key to securing productive employment.

Poverty has not been not Isaac’s only obstacle, as he also lives with a disability affecting his right hand and arm. He suffered a serious burn when he was young, resulting in the loss of his fingers and his upper and lower arm fusing together.

Hope was restored when Isaac was selected for CAMFED support at the beginning of secondary school. He is one of a number of boys and girls CAMFED supports through a partnership with the UK government’s Department for International Development (DFID) in Zimbabwe, where additional resources are focused on enabling students with disabilities to transition from primary to secondary school and to sit their end-of-school exams. Able to continue his studies, Isaac is optimistic for the future and hopes to become a doctor (Photo: Jon Pilch/CAMFED)

Through the program, Isaac has received uniforms, stationery, and school fees. CAMFED also sponsored him to have an operation to straighten his hand. Since then he has gained strength and his clothes fit better.

Isaac’s typical day starts at 5am, so that he can be at school at 6.30am in time for lessons. School finishes at 4pm and it takes him about 20 minutes to walk home. As well as Geography, Isaac loves athletics and is a long distance runner and sprinter. His favorite food is rice and chicken.

Isaac would like to be a doctor when he is older, so that he can assist others, the way he was assisted. His role model is his uncle, who is educated, became a doctor and lives a good life.