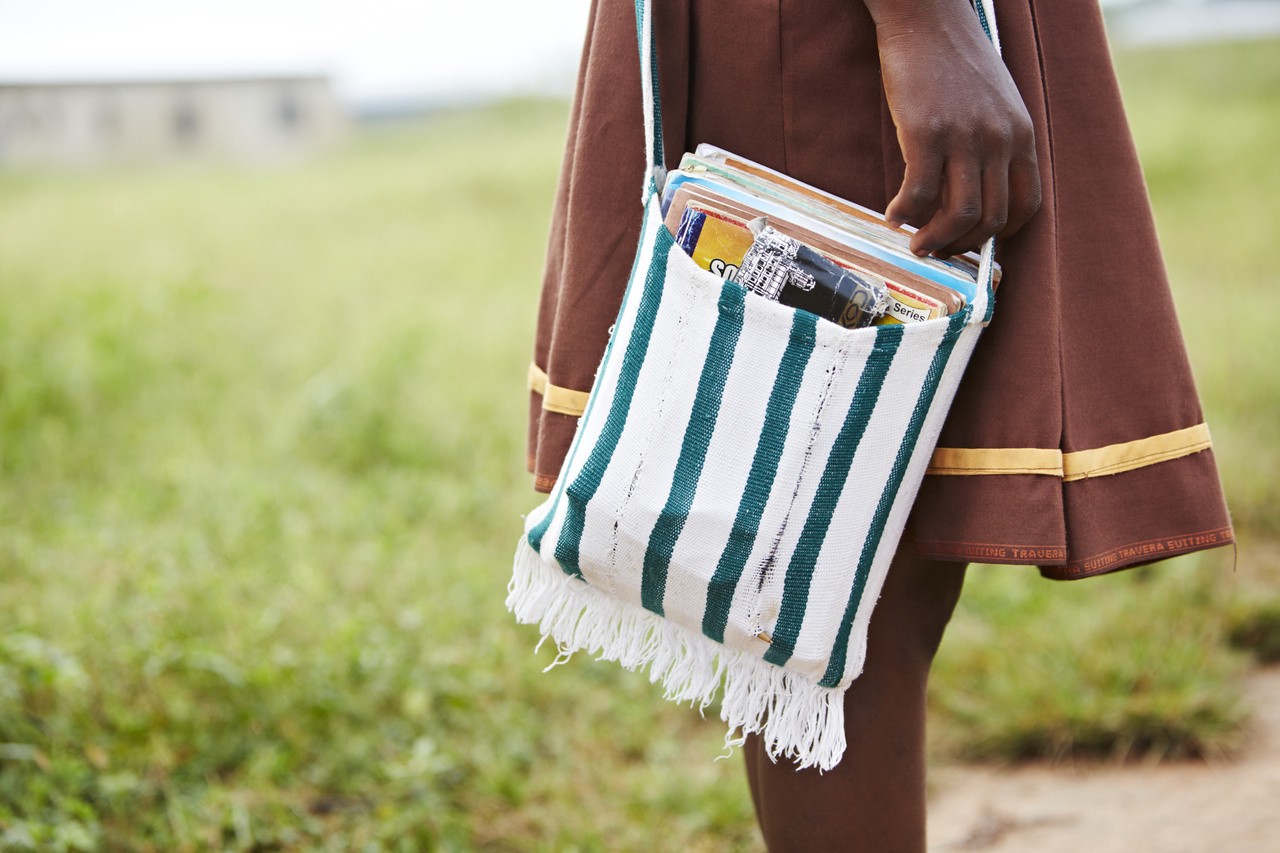 This interview highlights the extraordinary courage and deeply ingrained sense of justice among young educated women who were once vulnerable and excluded, and who will stop at nothing to make sure girls receive justice, working together to put an end to gender based violence.

In May 2019, a 12-year old girl in Tanzania saw justice when her abuser received a decades-long jail sentence for rape. The young woman who successfully brought the case to the attention of the authorities, supported the girl and her family, and partnered with community officials to ensure that nothing would stand in the way of a fair trial, is CAMFED Association member H.* She is a CAMFED ‘Learner Guide’ who delivers life skills lessons in her local school, and acts as a mentor and role model for vulnerable children, and is well known for placing child protection at the core of everything she does.

As soon as I found out about the dramatic conclusion of her fight for justice, I shared H.’s story of bravery with our advocacy network, and interviewed her to find out more. (Her answers have been slightly edited for safeguarding purposes.)

Could you please introduce yourself?

I stand for rights everywhere, and people in my community know that about me.

My name is H. I come from Tanzania. I was supported through school by CAMFED from Form 1 to Form 4. I am an orphan myself, so I understand from experience what it means to be vulnerable. Upon my completion of secondary school, I joined the CAMFED Association, CAMA, and in 2017 I qualified to be a Learner Guide at my local secondary school. During my training as a Learner Guide, I learned about child rights, standing for them, and that protecting vulnerable children is our role, my role as a Learner Guide. I stand for rights everywhere, and people in my community know that about me. We learned how to protect child rights, how to speak for the voiceless, and how to engage other people to support the cause. I know how the system works. I understand that there is a Social Welfare officer at district and regional level who I can consult. My community knows me as a person who can help in difficult child abuse cases. Busara*, the girl I helped, is an orphan; I had to step up for her rights.

How did you find out about this case?

Busara revealed the story of a man who had kept her in his house and raped her.

I was called by Busara’s aunt for help. She had learned that Busara (who is not a CAMFED client, but a girl in my community) was deteriorating academically and chose to take her from the grandmother where she was living.

One day, the aunt sent Busara to her grandmother for a visit, and Busara came home very late. When her aunt questioned her, Busara revealed the story of a man who had kept her in his house and raped her; she said it was the second time this man had done that to her. “He invited me in his house, he showed me pornography and he raped me. I cried asking him to leave me alone but he didn’t. I felt pains and there was blood.”

I thought quickly of what to do, just immediately to put this man into police hands.

The aunt asked for my advice and support on prosecuting the man, because they usually run away from the village after such events, and you can’t always get the police to look for them. She had taken Busara to the hospital for a checkup. She was told to go to the police first and bring the papers, and she went and obtained papers. Busara was checked and staff confirmed bruising consistent with sexual abuse. She was given medicines. Then her aunt called me for support.

I thought quickly of what to do, just immediately to put this man into police hands. Together with the aunt, and through a contact in his community, we persuaded the man to come to a bar for a meeting. I had informed the police, and given them the directions to the location, where he was arrested when the police arrived.

The girl stood up and revealed the whole truth.

Then I remained with one job: To follow up, encourage the girl to stand firm, to contact social welfare and to contact CAMFED. They all supported me. The next day, the girl was called to go and give a statement together with more information to support the investigation. The girl stood up and revealed the whole truth. They asked her what his room looked like, what it contained. She mentioned all the things inside the room, including video cassettes with pornography. The police went to investigate his room and found everything the girl had said. Video cassettes were hidden under the mattress but she was able to show the police. With this evidence, the police decided to take the case directly to court and asked us to remain available to follow up and testify when required.

So, what happened next?

I heard that the man was released on bail. I went into panic because I thought, oh is this another failing case?!

The case was mentioned several times in court. I went there every time, maybe 4–5 times, together with the girl, sometimes with the aunt. I kept on encouraging Busara to stay firm. Her aunt remained firm, trusting the girl and offering her support. One day, I heard that the man was released on bail. I went into panic because I thought, oh is this another failing case?! But we had all the evidence and all the support. CAMFED connected me with a representative of Child Helpline 116, who was also giving me encouragement and following up. I would update all of them on what is going on. I went and talked to my fellow CAMA [CAMFED Association] members, including a fellow Learner Guide who agreed that we visit Regional Social Welfare Office to give an update and our worry about his release. The social welfare officer listened and promised to follow up. After a few days, we heard that the case would be back in court.

I am an orphan myself, we need people to support us, stand by and for us.

Yesterday the ruling came out by the court. The man was jailed for 30 years for raping a 12-year-old primary school pupil. I am overjoyed! What an accomplishment! I am an orphan myself, we need people to support us, stand by and for us. I felt good to have done something like this for this orphaned girl. I am happy that my community trusts me to help, and this time I was successful. This case was opened in November last year! It looks like a long time, but worth the wait!

How does the community feel now — your relatives, family and friends — about you being involved in getting the man to be jailed for 30 years?

Now my husband thinks I am a super bold wife.

Like you would expect, there is a mix of emotions, but the majority celebrate with me, some silently. My husband was worried that I would be targeted for pushing so hard on this. I said, ‘If I was to die for standing for justice, let it be. Imagine if this was to happen to me, when I was young, or even now?’ But now he thinks I am a super bold wife.

So, what’s next for you?

We want to eradicate sexual violence against children.

With this, I am going to create even more awareness among many girls, and boys, to come out whenever they feel threatened. Together we can ensure their safety. And to make everyone accountable for any actions against children. We want to eradicate sexual violence against children. I will use my contact with students to share my experience (without mentioning the name of the girl). I want them to come to me or to others for support.

*Not her real name. Busara’s name has been changed to protect her identity. 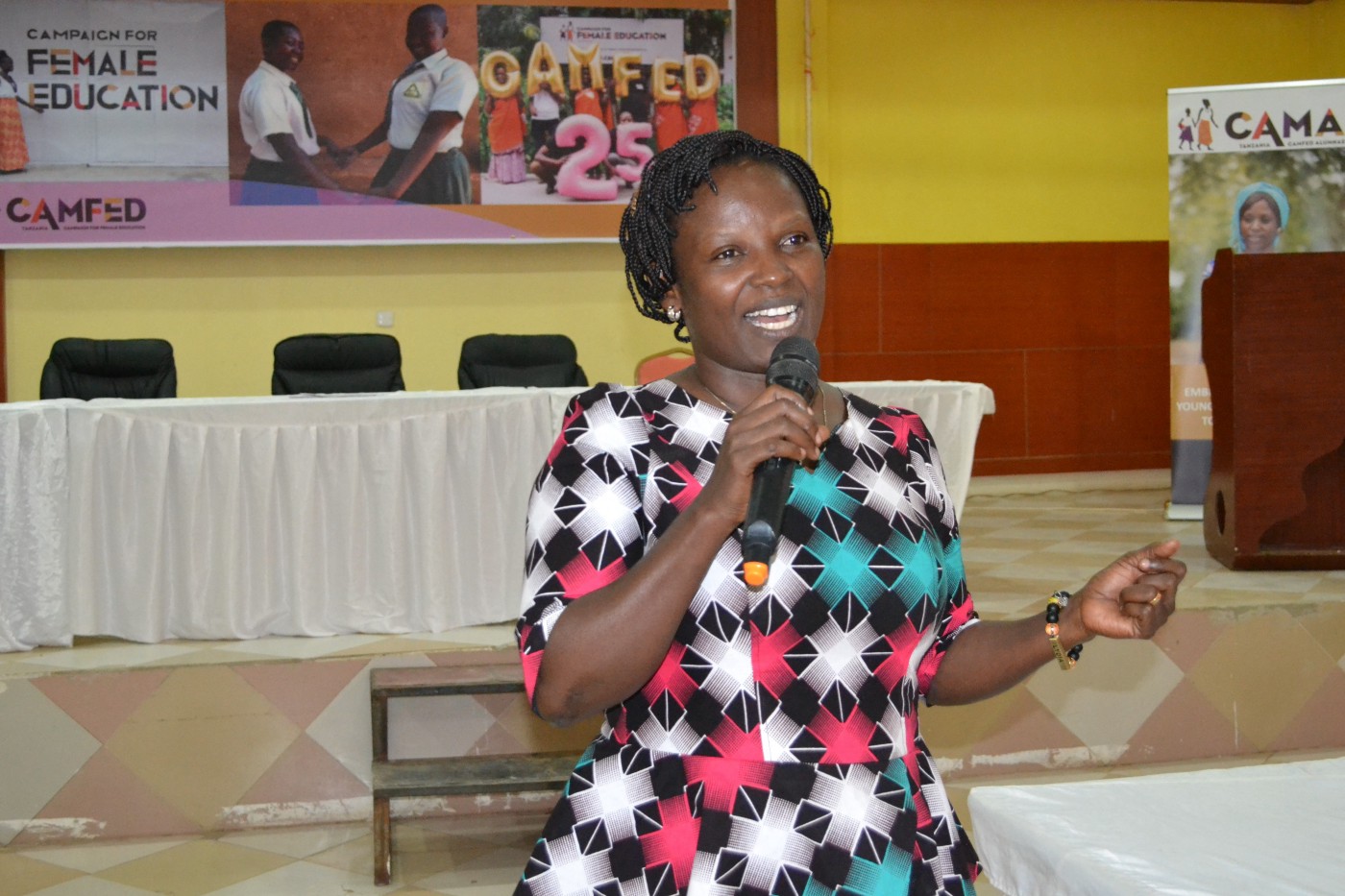 Lydia Wilbard is a founding member of the CAMFED Association of young women leaders educated with CAMFED support. She is also the National Director of CAMFED Tanzania. Lydia oversaw the implementation of CAMFED’s Learner Guide Program in Tanzania, through which CAMFED Association members like H. return to schools as peer educators to deliver a bespoke life skills and wellbeing curriculum, and help vulnerable children by connecting them to support and services. If you are inspired by H.’s courage and activism, why not get involved to help us transform more lives through education. 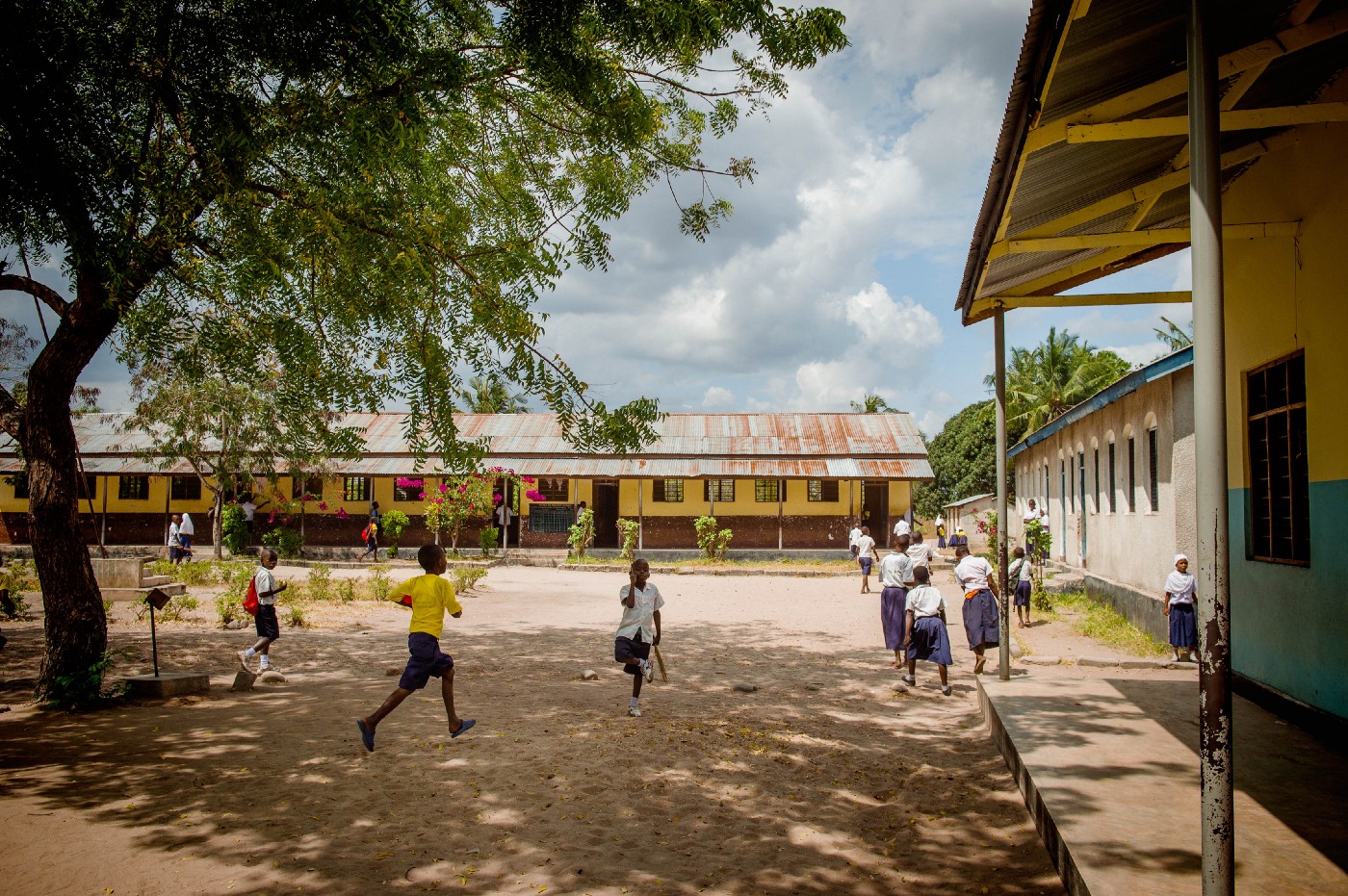 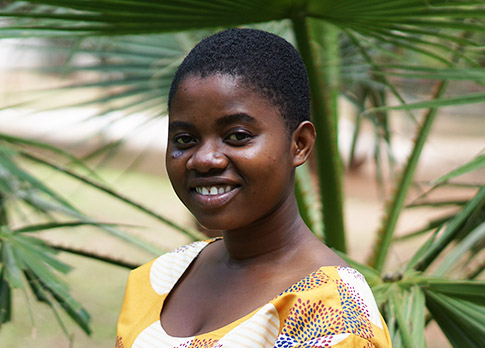 A passionate champion for girls’ education, Rose has a growing reputation in her community and beyond, as an anti-child marriage activist. She regularly facilitates awareness campaigns around child marriage, speaking out in front of large groups of parents and children, teachers and school committee members, together with local traditional leaders, mother support groups, social welfare officers and the police. 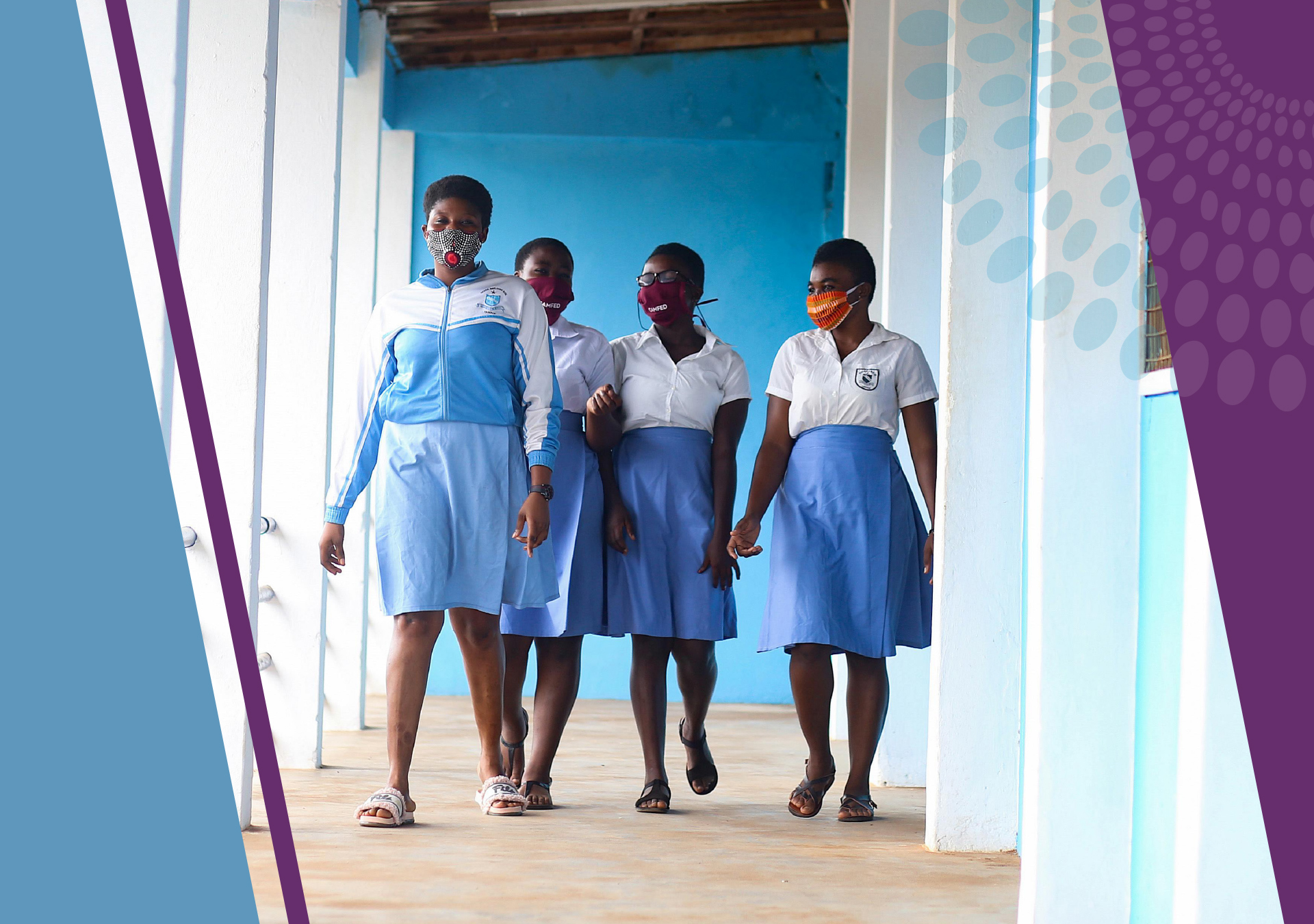 Social justice starts with girls' education, and is advanced by young women leaders working together for systems change. We show that the best minds to address local issues are those with an intimate understanding of the challenges the most marginalized in their communities face.