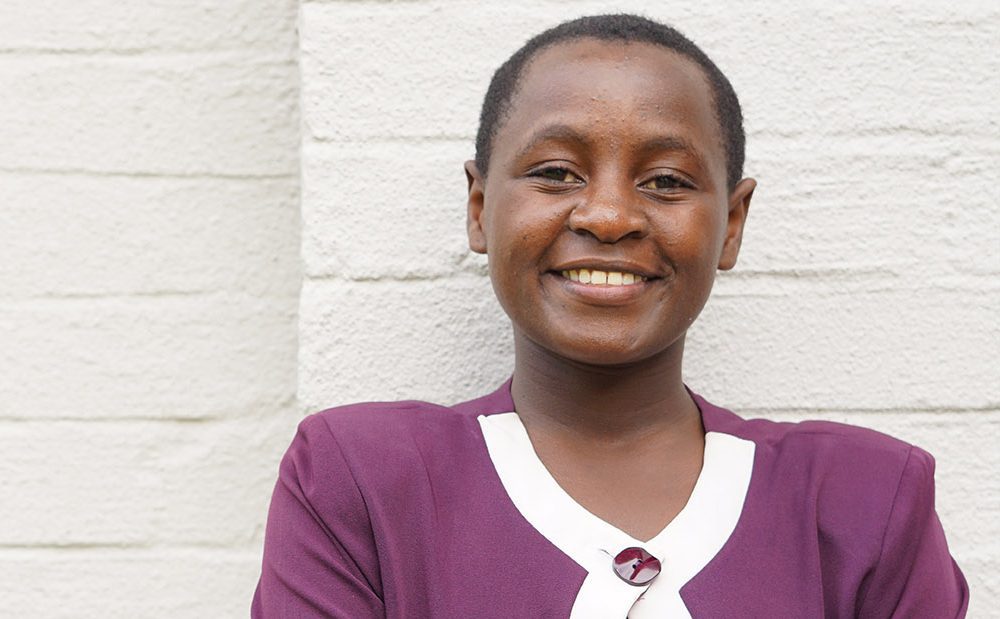 Following her father’s death, Tendai’s mother struggled to provide for her four children. Tendai and her siblings would walk to school barefoot and without school uniforms. At one point Tendai considered dropping out of primary school to become a housegirl and try to help support her family, but  with the advice and counseling of the Learner Guide in her school, she decided to continue her education.

When Tendai qualified for secondary school, CAMFED stepped in and supported her education until she graduated in 2016. Tendai developed her leadership skills throughout secondary school, first as a prefect and then as Head Girl.  She joined the CAMFED Association (CAMA) in 2015 and took on another leadership role, herself becoming a Learner Guide while she completed her studies. She developed her communication skills and had the opportunity to help marginalized and vulnerable children stay in school, just as as a Learner Guide had once done for her.

I now see a bright future because I was supported by CAMFED. I am now looking at universities. I didn’t think of going to university before CAMFED came to my support.

After she completed her studies, Tendai became a Transition Guide for young women completing secondary school in her village. As part of the program she was given business and financial literacy training, so that she could run a sustainable business, as well as teach these skills to new graduates. Tendai started her own business selling stationery and groceries. In only a few months she has been able to repay her loan and has passed on the stationery side of her business to her younger sister.

Philanthropy is a cornerstone of the CAMFED Association, and Tendai believes it is important to help others learn. She contributes not only as a Learner Guide and now a Transition Guide, but also financially. With the profits from her business, she is now able to support the education of other vulnerable students by providing them with school supplies.

It is very important to give vulnerable children books, pens, everything for them to learn so they can continue to pursue their education.

Tendai’s peers know her for her passion, compassion and rallying cry, “We are because you are.” She learned, through her leadership roles, that passion and focus are critical. As a result of this passion she was elected as CAMFED Association District Chairperson only a few months after completing secondary school. This appointment also made her a contestant for a national leadership position.

Tendai was the youngest of the 10 young women campaigning to become National Chairperson for the CAMFED Association in Zimbabwe. Her aspiration for her term of office is to “..to develop myself to greatest capacity and help others develop and thrive in all aspects of their lives. I will live consciously and courageously relate to others with love and compassion and leave this network better for my contribution.” Tendai with a local chief at a Community Development Committee meeting in Zimbabwe. (Photo: Harriet Grigg/CAMFED)

In December 2017, with 56% of the vote Tendai, a 19-year-old, became the leader of the CAMFED Association in Zimbabwe, a position she held until 2019.  Tendai is inspired by the growing CAMFED Association and the opportunities it presents, “We share ideas, knowledge, challenges and solutions to those challenges. It is a great network.”

Tendai is a role model in her community and has a bright future. She is now continuing her education and attending university, something she never imagined as a child. She also hopes to expand her business and with it her philanthropy. Her goal is to give back not only to her community or district, but all of Zimbabwe.

Tendai’s education and training was made possible through funding from the UK government’s Foreign, Commonwealth and Development Office (FCDO) under the Girls’ Education Challenge – Transitions.