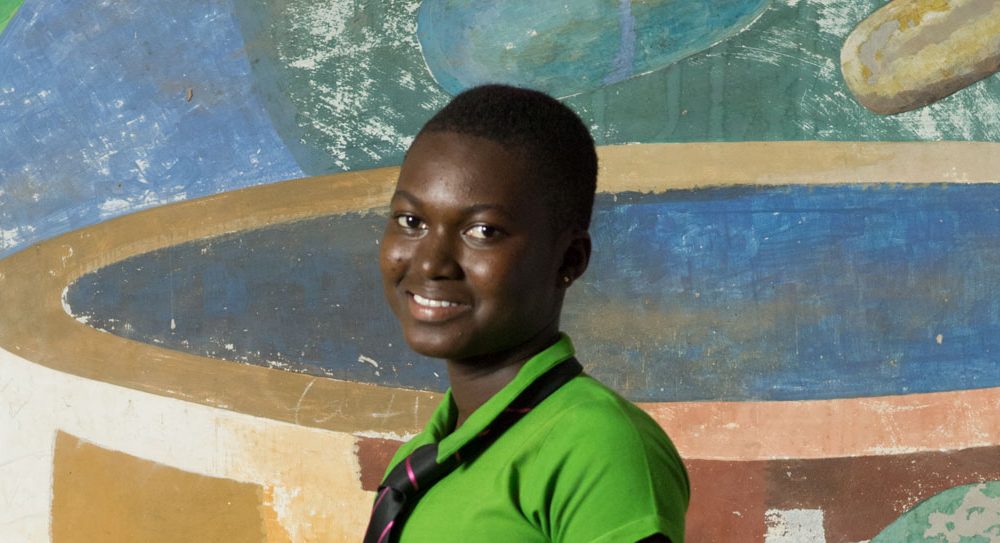 Sheila’s essay demonstrates the incredible insight and empathy developed on her journey from exclusion and extreme poverty to self-belief and leadership. With the education and support provided by CAMFED  and The Mastercard Foundation Scholars Program, girls like Sheila are showing the world just what we lose when we do not unlock girls’ transformative potential.

Sheila, who is 17, comes from Builsa North District in the Upper East Region of Ghana and is the youngest child in a family of four. Sheila and her siblings were raised by their mother, a subsistence farmer, who struggled to grow enough food to support the family, because she did not have the money to buy farming equipment or fertilizers to improve the crop. Sheila had to sell water in the market, wash clothes for other people, and run errands for them in order to try to get enough money for her school fees. She often went to school hungry. She had little hope. Then she was selected to receive a full CAMFED scholarship funded by The Mastercard Foundation Scholars Program.

The world would have buried my great talents with me.

Now Sheila is in her second year of Senior High School, studying General Science, which she hopes will be the first step in fulfilling her dream of becoming a doctor. “You came to my rescue and I believe that if not for your intervention, the world would have buried my great talents with me, because I know I have a lot to offer the world,” she says. “Your coming into my life was a new beginning for me. You are helping me develop my leadership skills as well as pursue my goals. Now, I only have to worry about my studies because I don’t have to go through all the stress I used to go through before about being able to pay my fees. I want to be a medical doctor in future because in my community we don’t have enough doctors, which causes so many lives to be lost. I want to be able to save the lives of people.”

Let me introduce myself to you. I respond to the name Human Rights.

In addition, Sheila wants to be a writer, an inspirational speaker, and a human rights advocate. “I know you are wondering why I mention them as part-time jobs. People think it is not possible, but I believe this: there is nothing impossible under the sun and we can always get to where we want to provided we are hard-working, determined, patient, and can endure with dignity.”

Of the 9,500 applicants to the Commonwealth Essay Competition, Sheila was the only person in Ghana and one of only 16 applicants across Africa to win a Gold Prize in the Senior Category. Reading her essay, it is perfectly clear why. The discrimination and injustice Sheila, her family and her community suffered makes the concept of human rights not a theoretical construct, but a personal, as well as global, prerogative. In her essay, Sheila explores Human Rights, Sports, and Ethics by giving all three of them a voice. She shows the world how we are still failing entire communities, entire countries, and how the neglect of human rights is as much a developed as developing world issue. Sheila also shows us the practical steps we can take to ignite compassion and action, and end discrimination.

It is the mission of CAMFED and The Mastercard Foundation to support girls like Sheila to find their powerful voice. When they do, the result is truly transformational. Sheila is determined to fight for people no one else will fight for. She says, “I want to be an inspirational speaker so I will be able to motivate young people and others who are going through similar problems not to give up because I was motivated by CAMFED not to give up on my dreams and ambitions.”