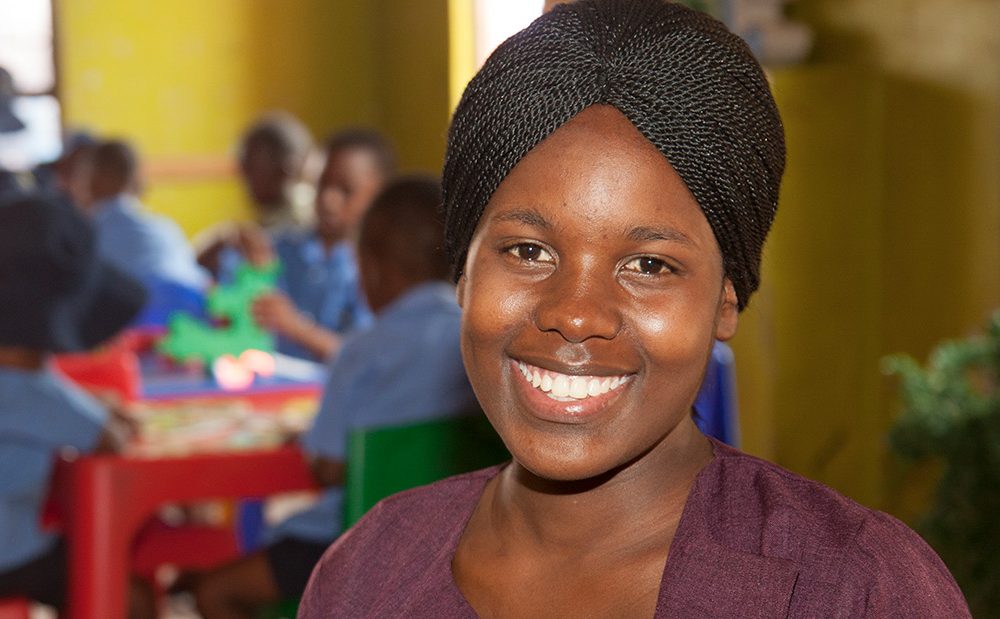 Sazini is the last born in a family of three boys and five girls from rural Zimbabwe. Tragically she lost two brothers and a sister in childhood. Her parents worked as subsistence farmers, growing and selling vegetables to support the family. From an early age Sazini and her siblings helped on the farm and took the produce to market to try and raise enough income.

When Sazini’s father fell ill during her first year of secondary school, the family’s financial situation became even more strained, and she worried about the future of her education. She spent her holidays working hard on the farm but struggled to sell enough vegetables to  pay her school fees. When CAMFED stepped in to support Sazini in her education, it came as a great relief.

Life became easier at that moment… I wasn’t worried about fees or stationery, because I knew that CAMFED would support me.

When she passed her final exams and graduated from school, Sazini’s future prospects were transformed. She said: “After completing my education I had hope that I will have a positive life.” Sazini joined the CAMFED Association (CAMA), and took the opportunity to participate in the Learner Guide program as well as starting her own hair braiding business.

As a CAMA member I learned to be independent and be brave enough to stand my ground… I shine in my community by doing good things.

Through her volunteer work as a Learner Guide, delivering life skills and guidance to younger girls, Sazini discovered her love of teaching and working with children. She successfully applied to train as an Early Childhood Development  (ECD) teacher through a program supported by CAMFED partner the ELMA Foundation. Sazini in the classroom with young learners. (Photo: CAMFED/Jon Pilch)

Together with 12 others in Zimbabwe, Sazini is part of the first large cohort of young women educated with CAMFED’s support to qualify as ECD teachers. After their own right to education was nearly denied, it is a personal and organisational triumph to be able to offer quality teaching in communities where other children are at risk of being left behind.

Early Childhood Development is a crucial stage and the things learnt there are the foundation of a child.

In future, Sazini hopes to open her own ECD centre and ensure that inclusive education begins at an early stage. She aims to continue changing attitudes amongst parents, helping them to understand the benefits of early learning as a starting point for education and success.