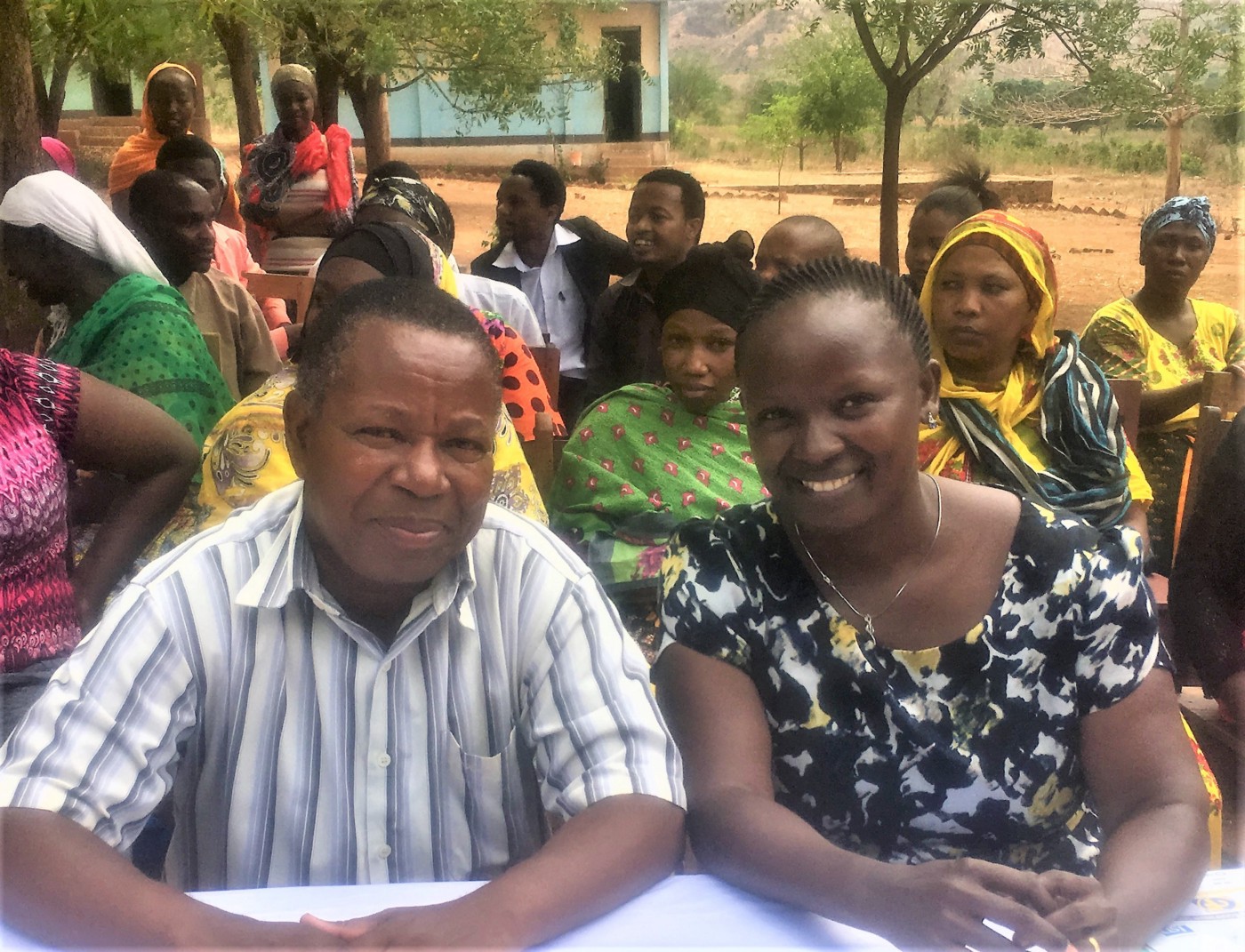 By Lydia Wilbard, National Director of CAMFED Tanzania & Founder of the CAMFED Association of women leaders in Tanzania

It is an amazing moment when you find that the seed you just planted is already a full grown flower.

The room was full of teachers and parents when Chiku and I walked in. I hadn’t planned to visit this school in Tanzania’s Korogwe District. I had just paid my respects to the District Executive Director, and was on my way to see the training of another 27 young women as “Learner Guides.” Learner Guides are school graduates trained by CAMFED. They are young women who understand what it means to be excluded, what barriers poverty throws in your way. They volunteer in their local schools to deliver a study and life skills curriculum to complement the academic subjects, so that children have a better chance to succeed in and after school. Learner Guides are role models and mentors, who can connect vulnerable children and their families with support services. They also work to prevent child marriage, and return children to school. What was so exciting about this trip was that I was witnessing the first time we rolled the program out, together with the Tanzanian government, in non-partner districts.

I couldn’t believe my eyes when I walked into the room — The Head of School was my former high school teacher.

Chiku, who coordinated and led the Learner Guide training in Korogwe, had said to me, “Madame, there is one school we have been requested to stop at on our way. They want you to meet the community members.” I couldn’t believe my eyes when I walked into the room — The Head of School, Mr. Misanya, was my former high school teacher. I used to get in trouble for selling postcards to wealthier students to raise money for my fees… We hadn’t met in 14 years!

“We didn’t know you were going to make it,” he smiled at us. “This is a group of parents who approached me and asked for a meeting to discuss the challenges that face our students, so that we can work together to resolve them. I am so excited and happy. It’s the first time in the 12 years I have been head of this school that I have seen this community taking the initiative to visit my school. Today we have 20 parents here together with my staff. ”

Something else, something just as powerful, had ignited in this community.

I realized that while I was busy focusing on the roll-out of the Learner Guide Program in Korogwe, something else, something just as powerful, had ignited in this community.

Parents preparing a school meal at one of our partner schools. Photo: Eliza Powell/CAMFED

The Chairperson of the parent group presented their plan to me: “We have agreed with school staff that food is our first priority. We are starting straightaway. We will prepare meals for Form One and Form Three students who are starting their exams tomorrow, so that they do not have to take their exam on an empty stomach. Today, we are also going to present some items we have prepared for the school for the benefit of our students: Two buckets and two stands for running water — one for the boys’ toilet and one for girls’ toilet, together with seven liters of liquid soap. We have also prepared some notebooks, pens and pencils which we will be distributed to struggling students. Teachers have identified their names and we want to support them with what little we have, to start with.”

We want to give what little we have to complement your work, to show appreciation and take care of our children

Stunned, I asked how the parents came together and why they decided to do so at this particular time. “CAMFED has woken us up,” they said, “We want to work together, from now on. We have seen the organization coming to support our children. We want to give what little we have to complement your work, to show appreciation and take care of our children.” 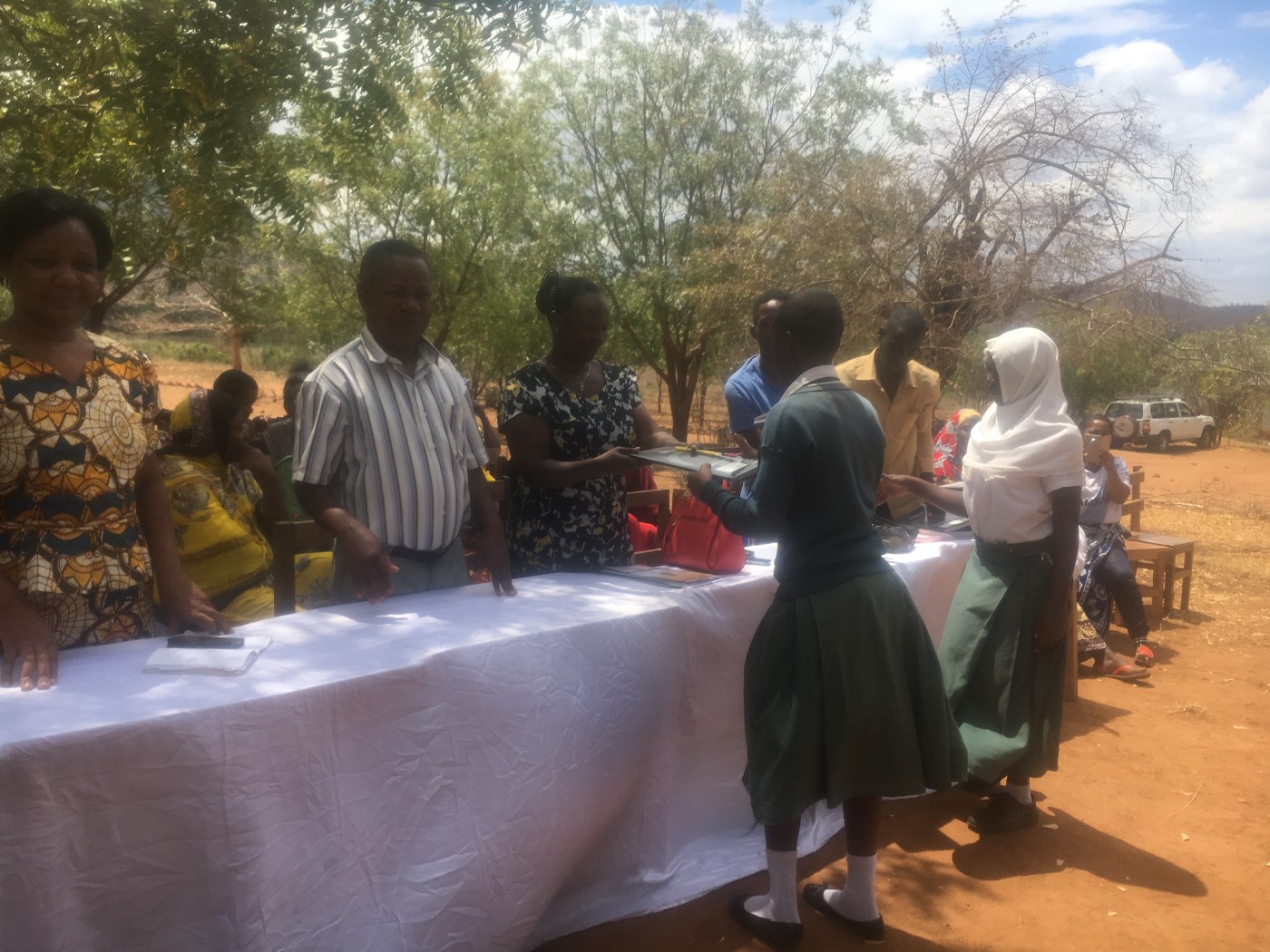 I spoke to parents about their role in supporting education, drawing on my experience from existing partner districts. We not only support girls with bursaries — and CAMFED Association members with training and resources — but also help to make the most of the expertise, energy and philanthropy among community members. We support parents with training, equipment or small grants for their school-related projects, for example. So I was able to explain the benefits and impact that this group was likely to see from its efforts: children learning more effectively and doing better in exams; fewer students dropping out of school; and increased school attendance among children in their community.

He was so full of pride and mentioned to everyone that day that I was his former student. He urged his students to also do him proud one day.

After meeting teachers and students at the school, Chiku and I continued to the Learner Guide Training session. But not before I hugged my former teacher, thrilled to be working together. I was so happy, and he was so full of pride and mentioned to everyone that day that I was his former student. He urged his students to also do him proud one day. 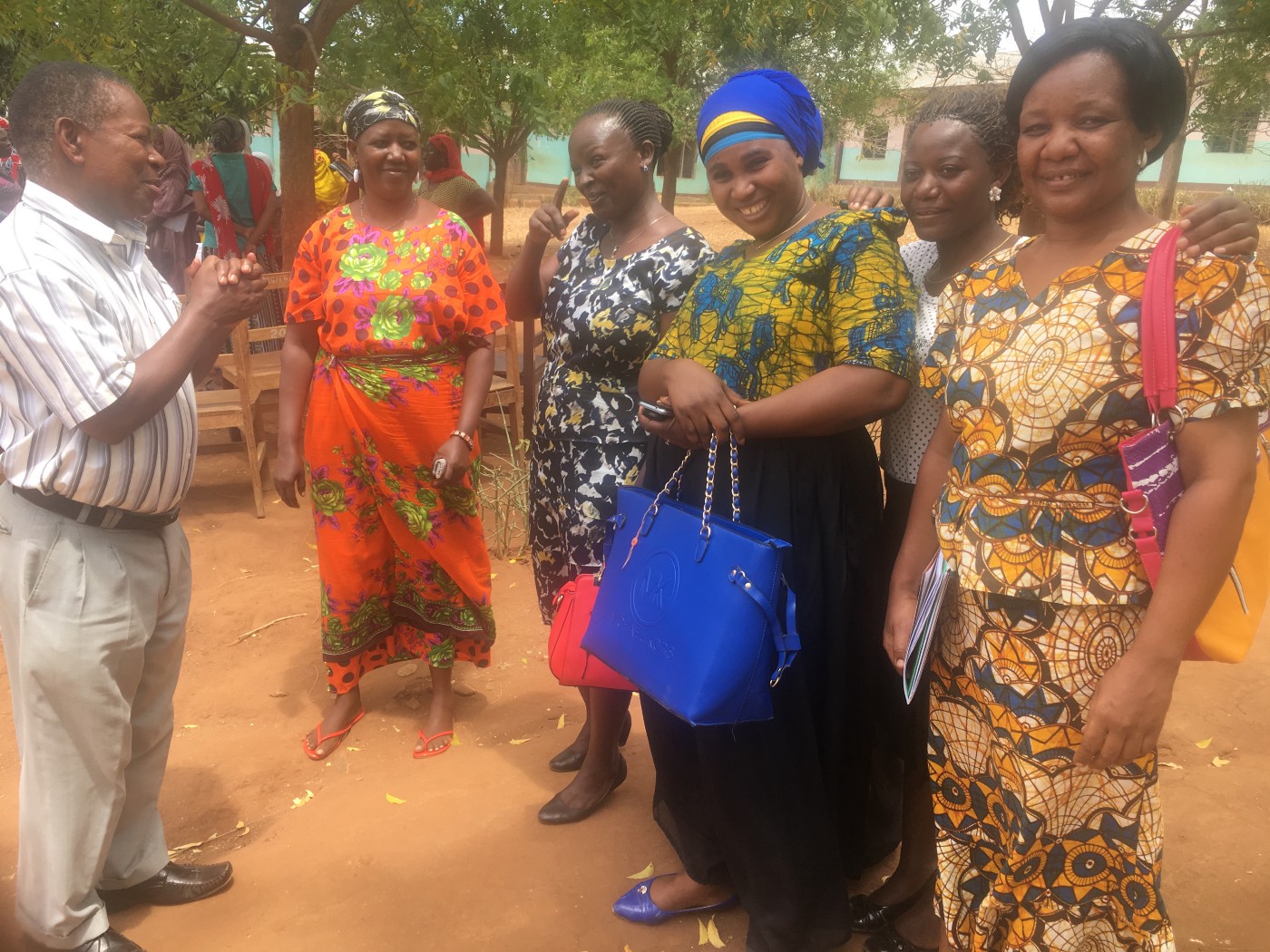 Mr. Misanya was so full of pride.

By rolling out the Learning Guide Program* in Mr. Misanya’s school, and 79 others, 180 young women will directly reach at least another 6,400 children with life skills lessons and study materials. Together with the Ministry of Education, Science and Technology and the President’s Office, Regional Administration and Local Government, we are proving that we can apply our learning and roll it out nationally across impoverished rural communities. We are extending an education innovation which has had young women who once received support from CAMFED, like me, at its heart.

Later I saw how the new Learner Guides ‘adopted’ into our CAMFED Association had also adopted our core values of ‘plowing back’ the benefits of our education. But what thrilled me to the core that day, and made my heart sing, was the activism of parents in Korogwe, who know that the responsibility for their children rests with them, and that their resources are needed to match CAMFED’s.

Never had I seen a seed that had just been planted turn into a full-grown flower overnight. 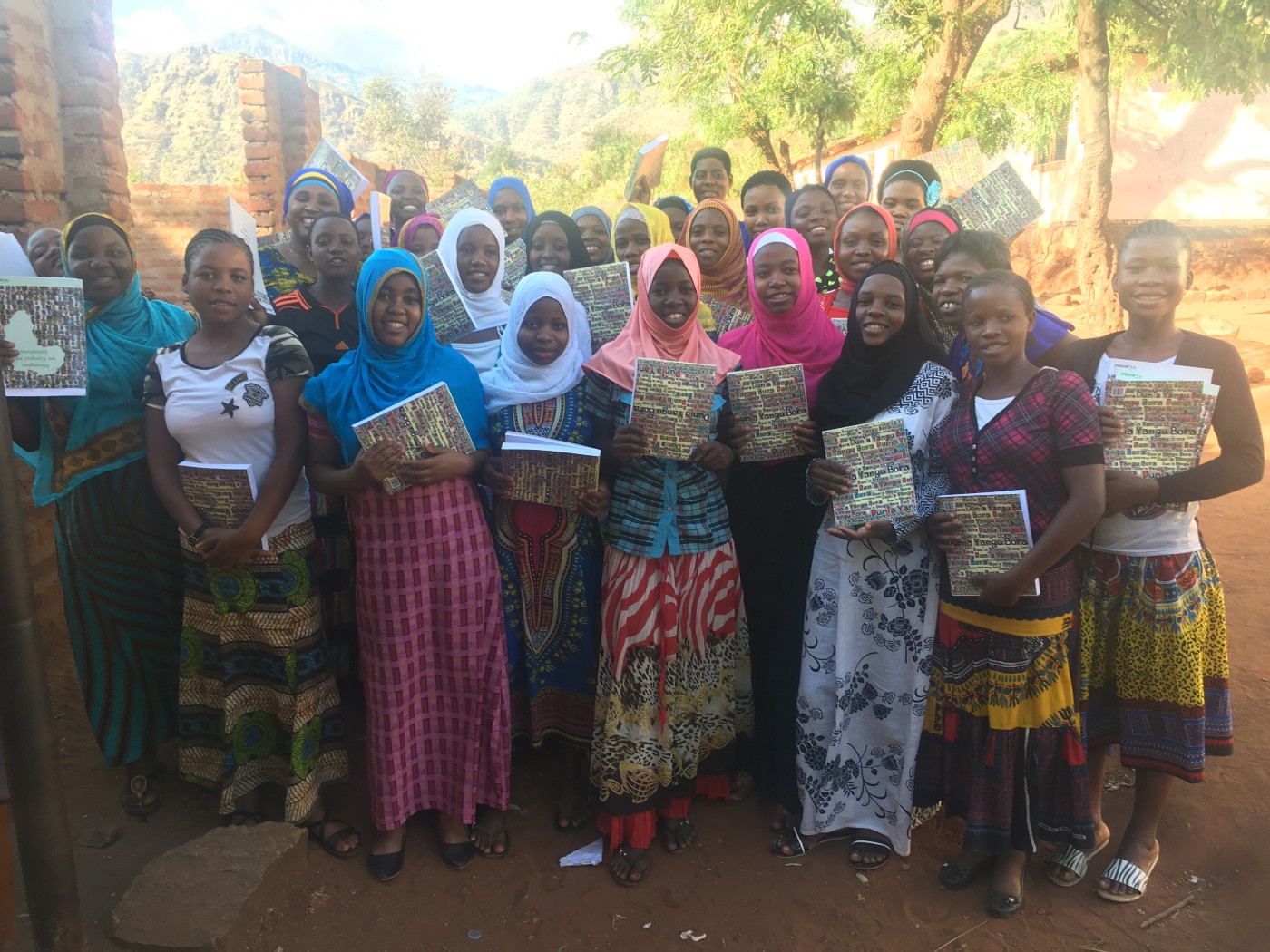 Our new Learner Guides in Korogwe District, holding the ‘My Better World’ life skills workbook, which each of their students will receive.

*CAMFED had already done this successfully in partner districts in Tanzania, Zimbabwe and Ghana. We have trained thousands of young women in our CAMFED Association. They work with thousands of partner schools, where we also provide bursary support to the most vulnerable children. When the Ministry here in Tanzania saw the success of the program — which has pushed up learning outcomes among the most marginalized girls to an unprecedented scale — we worked together to introduce it in non-partner districts.

Lydia Wilbard is National Director of CAMFED Tanzania and the founder of Tanzania’s CAMFED Association (CAMA), the pan-African movement of young women supported by CAMFED, the international NGO which supports marginalized girls to go to learn, thrive and lead change. Completing her secondary education against great personal odds, Lydia ran several successful businesses to fund her secondary and university education, graduating with honors from Muhimbili University of Health and Allied Sciences. As a founding member of the CAMFED Association in Tanzania in 2005, Lydia became an active business mentor and leader within the network. Awarded a competitive scholarship by the government of the United States, Lydia earned a Masters in Public Health at John Hopkins University and returned to Tanzania to re-join CAMFED. 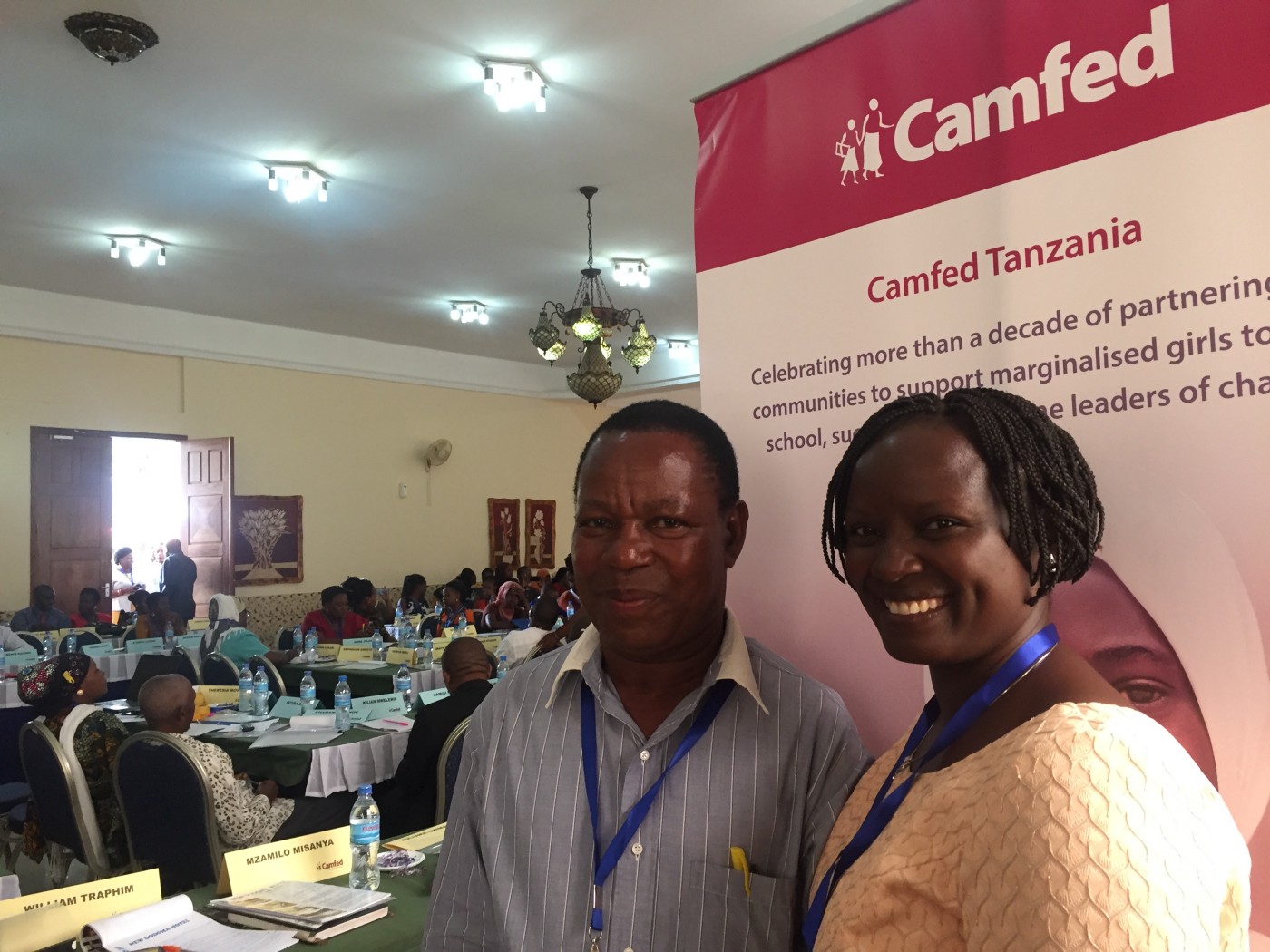 Less than a month later, my former high school teacher joined us at CAMFED Tanzania’s 10th Anniversary AGM. I was so happy! 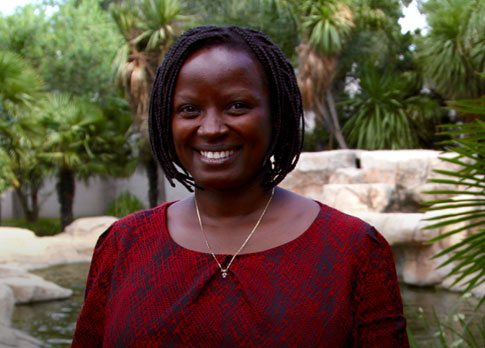 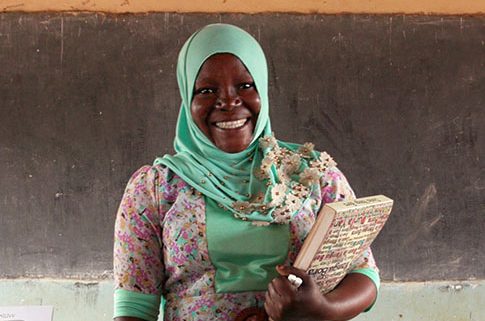 On Saturday, 3 October, CAMFED Tanzania welcomed the Hon. Loata Erasto Ole Sanare, Morogoro Regional Commissioner, representing the Hon. Suleiman Jafo, Minister from the President’s Office - Regional Administration and Local Government (PO-RALG) as the Guest of Honour to an event where he payed tribute to Learner Guides’ activism. The Regional Commissioner presented certificates to the young women in recognition of their services to vulnerable children in their communities, ensuring that every child - especially girls, who are usually the first to drop out of school because of barriers related to poverty and gender - get the opportunity to stay in education, learn and thrive.