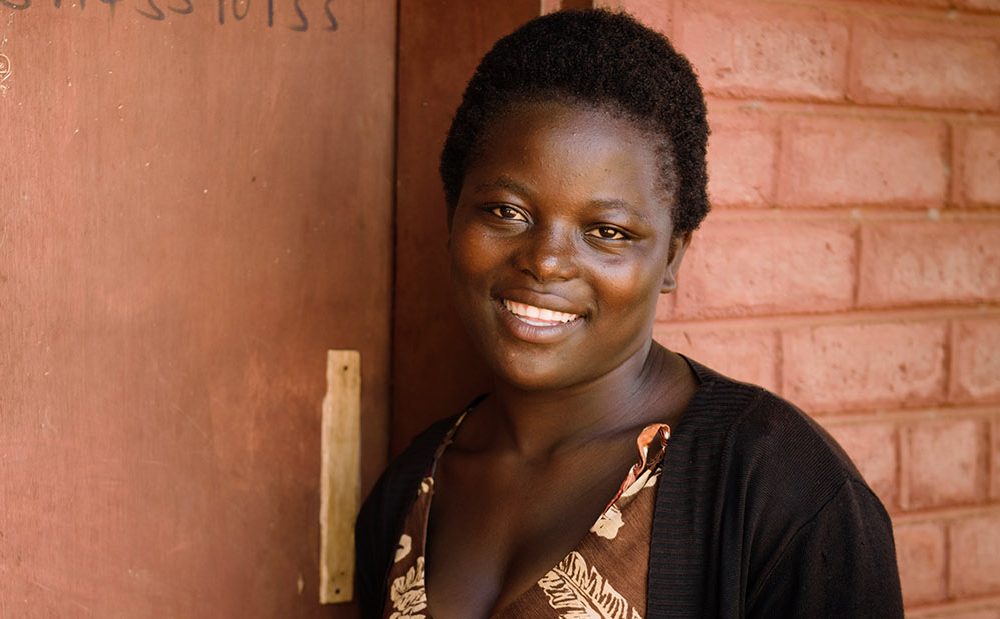 Fatima was orphaned as a young girl, and from the age of ten was raised by her grandmother. Deprivation in their rural community meant that the education of boys was prioritized over that of girls. Even at primary level, Fatima, as the eldest girl, would often stay at home to help with household chores. Her grandmother relied on subsistence farming to support Fatima and her four siblings; there was barely enough money for food, let alone education.

Even with all these challenges, Fatima felt she had to try her best to stay in school. As well as helping with chores at home and finding odd jobs to earn money, she attended school as much as she could. But by the beginning of secondary school she was sent home for not paying her fees. With no way to raise the money, Fatima believed her education was over.

After a month had passed,  she was contacted by a School-Based Committee made up of teachers, parents and other community members. Together with the local Traditional Leader, they talked over Fatima’s family circumstances and selected her to receive CAMFED support. Fatima was so excited and remembers how the support covered every need: “Paying my school fees, giving me sanitary pads, giving me a stipend every term, exercise books every term, ten hardcover notebooks every month, and a school bag for two years, and shoes for two years, school uniform and socks.”

Since that day, Fatima has been a trailblazer in her family and her community. She was the first girl from her village to attain the Malawi Certificate of Education (MCSE) and has become a leader in the CAMFED Association (CAMA). Fatima took the opportunity to become a Core Trainer, and in this role, was instrumental in launching CAMFED’s Learner Guide Program in Malawi.

CAMA is a game changer because it lifts a girl to where they want to be. They came from a poor family but they are making change for a better world now. Fatima’s confidence has grown since being able to take up a leadership role amongst her peers. (Photo: CAMFED/Eliza Powell)

Working as a Core Trainer, Fatima helps other young women in her community to become youth mentors and entrepreneurs. She runs her own successful business, selling soap powder, and has become the breadwinner for her family.

She says: “Without CAMFED, I would not be where I am. I have improved my living conditions, I am running a small business, and I am paying school fees for my two younger brothers.”

Determined for others to share these opportunities, Fatima is a passionate advocate of girls’ education. She found the courage to speak with the Traditional Leader in her village, respectfully but firmly challenging his views. She opened his eyes to the fact that their community traditions were not serving the best interests of women and girls. Impressed by her achievements and commitment, the Leader told his council that Fatima should be present at all their future meetings.

I encourage girls to go back to school so that they can become leaders of tomorrow and they can live without support from their husbands.

Some of the most pressing issues for Fatima’s community, and for much of the rural population in Malawi, are those of poverty, early marriage and childbearing, and HIV/AIDS. These are all exacerbated by low rates of girls’ education and  a lack of female role models. Together with members of her local CAMFED Association chapter, Fatima conducts community outreach about issues including sexual and reproductive health and general well-being.

Fatima is also working towards her dream of becoming a teacher. At secondary school she was inspired by two teachers from disadvantaged backgrounds, who through hard work had bettered their lives. Seeing this Fatima began to realise that being an orphan from a poor household didn’t mean she was unworthy of education and success. Today, she has been accepted for teacher training  and holds the potential to transform hundreds of lives as a teacher, mentor and leader of change. Fatima encourages younger girls in her community to remain committed to their studies in spite of their challenges. (Photo: CAMFED/Eliza Powell)

I am really happy because I have brought growth to my grandmother and I am able to support my family because of education.