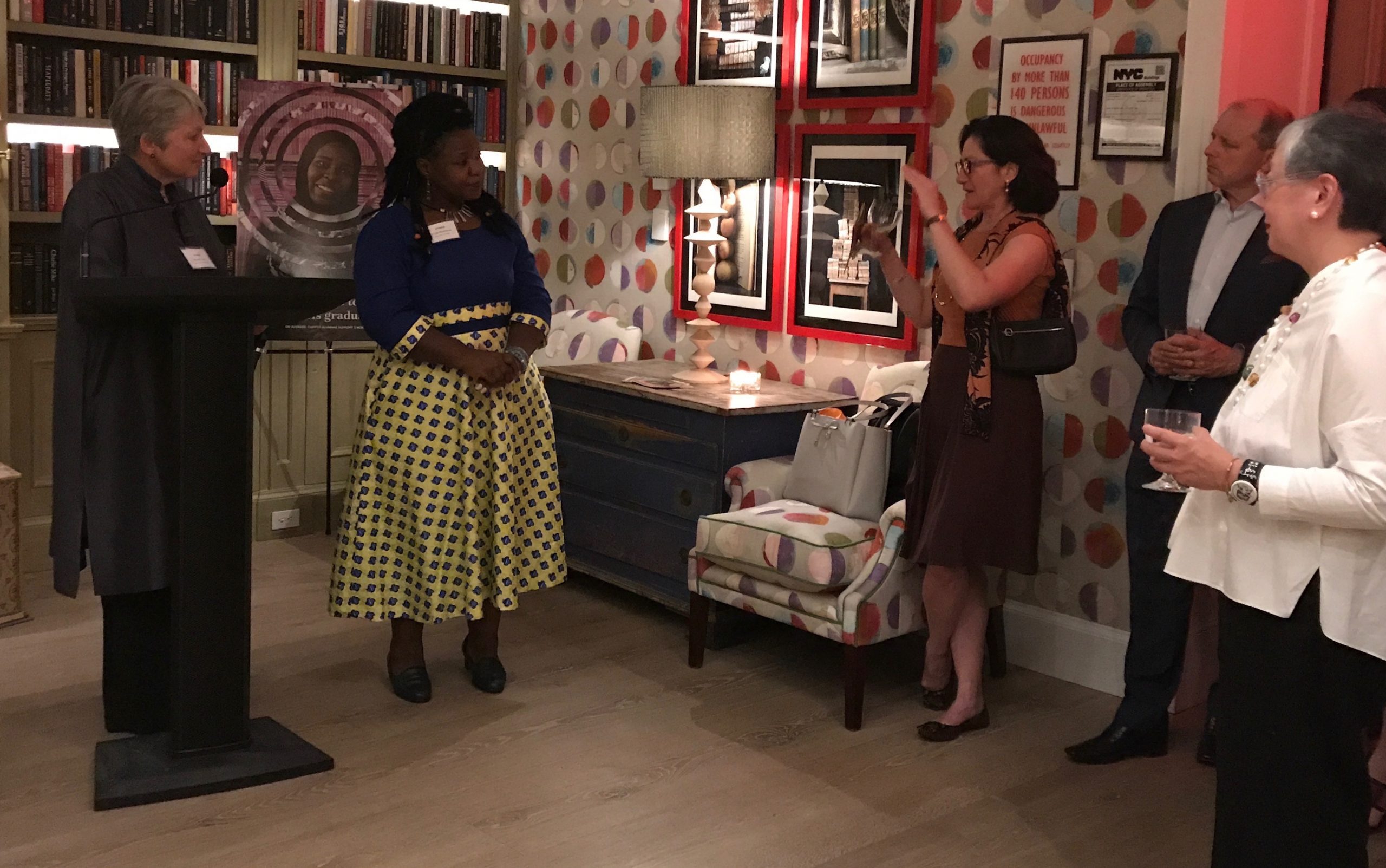 On the evening of September 12th, Miranda Curtis, CAMFED International Board Chair, hosted an unforgettable event to celebrate CAMFED’s CAMA alumnae network reaching 100,000 members. It was a night of inspiration, hope, and lively discussion. Guest-of-honor Angeline Murimirwa, Regional Executive Director, brought to life how CAMFED’s leaders and alumnae are transforming Africa as young educated women dedicated to the education of the next generation.

Miranda Curtis and Angeline Murimirwa were joined by Lucy Lake, CEO of CAMFED, and fellow champions of equality to reflect on CAMFED’s proven model of success, which empowers marginalized women with educational, mentoring, and career opportunities within a community network of support.

Miranda underscored the incredible returns on girls’ education, shared her personal story of how she became CAMFED’s Chair, and why CAMFED’s model is so powerful.

Having 100,000 CAMA graduates – present-day entrepreneurs, doctors, teachers, and lawyers – as role models in the community, who are leading the next generation is the key to sustainable, long-term change in Africa.

Angeline next recalled the amazing progress that she has witnessed firsthand. She inspired the audience by stating, “by the time I was to go into secondary school, I was resigned to my fate, the fate of my mother and my grandmother before her, that at grade six I would be done with school. A few years later, I told that story to 400 young women who, like me, had been supported through school by CAMFED.” She continued and said, “We all asked, through panic, anxiety and fear, what was next? We have chosen, as a network, to harness the power of education, to harness that opportunity and change the fortunes and educate the next generation. CAMA now supports more girls than international donors, not because we have money, we don’t, or because someone told us to, but because we understand intimately what that opportunity meant, and we will not waste it.”

CAMFED’s 100,000 graduates are poised to accelerate and scale the organization’s unique model of education, support, and impact. These alumnae will be the driving force of systemic change in African communities and countries by continuing to inspire and develop leaders, one girl at a time.

Miranda Curtis addresses the attendees of the 100,000 member celebration.

In 2014, CAMFED pledged to support 1 million more girls though school by 2020. As of today, CAMFED is more than half way toward the completion of that goal. The most unique aspect of the CAMFED model is its multiplier effect. Each CAMFED alumna supports on average at least two more children through school. Simply put, when CAMFED supports one girl through school, three go on to graduate.

Over the past 25 years CAMFED has built a powerful infrastructure and relationships to support education in sub-Saharan Africa. This infrastructure includes financial support for education, social engagement, grants for graduates to start businesses or continue their studies, and the activism of alumnae to mentor and support new students through school.

Lucy Lake made the final remarks for the evening, stating;