Despite its status as a middle income country, 28.3% of children in Ghana live in poverty. Poverty is concentrated in the northern, rural districts where CAMFED works, where up to 50% of the population lives below the international poverty line of $1.90 per day. 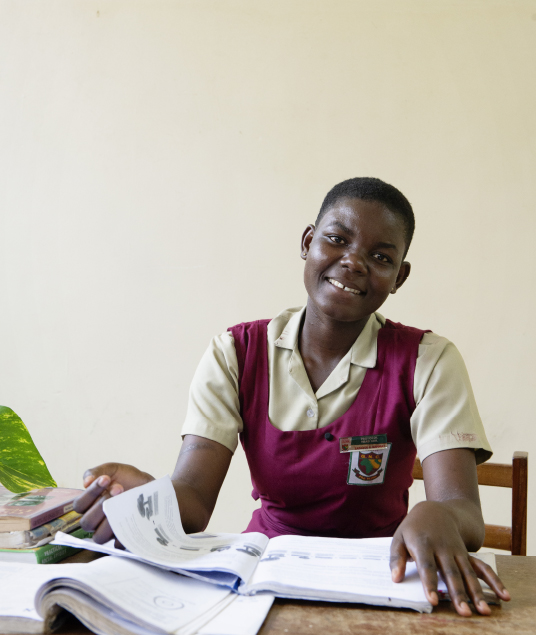 CAMFED Ghana launched in 1998, working in the Northern Region, and now operates in four regions and 31 districts. In the communities where we work, chronic poverty excludes many girls from education, with only 25% of the poorest rural girls completing lower secondary school, and only 11% completing upper secondary school. This persistent poverty pushes vulnerable girls into unsafe work or child marriage.

To support themselves and their family’s basic needs, large numbers of girls head to urban areas to work as street porters, referred to as kayayo, at city markets, making them vulnerable to abuse and exploitation. Or, with few economic prospects open to them in their villages, young women face pressure to marry early in order to reduce the financial burden on their families.

Over 20% of girls nationwide are married before their 18th birthday, and in northern Ghana rates can be as high as 39%. As early marriage limits girls’ skills, resources, knowledge, social support, mobility, and autonomy, they often have little power in relation to their husband, putting them at greater risk of domestic violence, HIV/AIDS and early pregnancy. For married girls and young mothers, this only entrenches the cycle of poverty as out-of-school they lack the resources and support to enter secure employment. On the other hand, women who have been able to attain a secondary school level of education or higher marry later than and have children at almost half the rate compared to women with only a primary school education.

"Although it may seem like Ghana is doing well, if you scratch below the surface, there is a big gap between urban and rural, rich and poor. What CAMFED Ghana is doing is building networks and relationships around the poorest, most marginalized girls – they are succeeding because they have all these people around them.

What motivates me to go to work every day is what will happen to these girls in the future. I can see the potential of every one of them, and there’s not one single girl who has ever disappointed me. The moment you invest your time and resources in a girl, you can see the change in her – in the way she talks, the way she walks, the way she thinks. And you can see the change in her community, as she and her sisters in the CAMFED Association — our network of women leaders — support more girls as Learner Guides and role models."

Nimatu Siisu, a member of the CAMFED Association (CAMA) of women leaders educated with CAMFED support, recounts her personal story of transformation through education, as she pays forward the benefits of her schooling, supporting a new generation of girls to stay in school, learn, thrive, and become leaders in their own right.

Find out more about our work